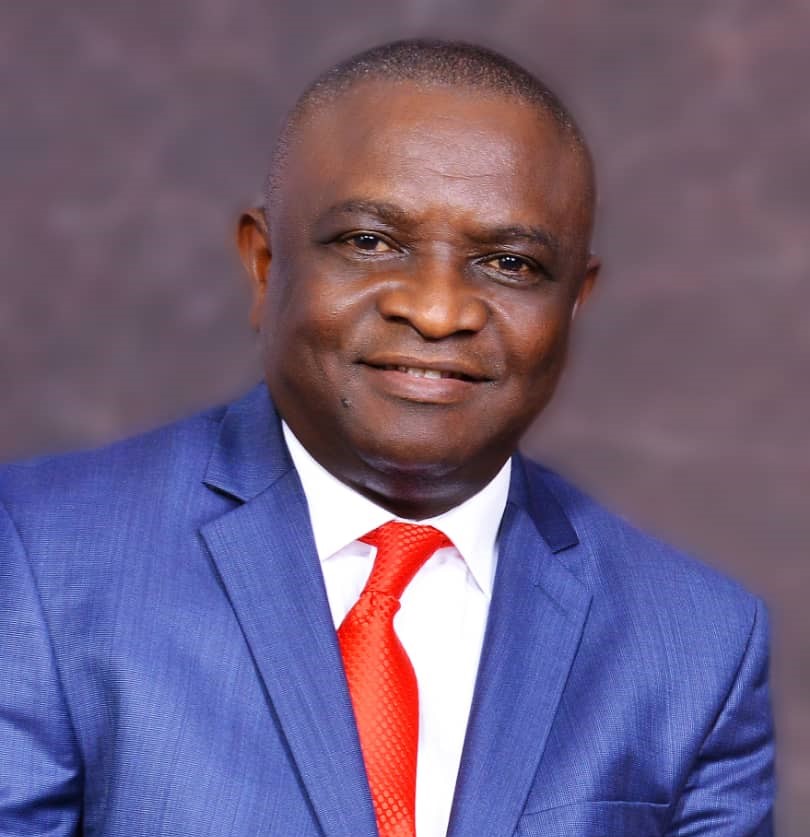 Play me if I don't play automatically

I have fought a good fight, I have finished my course, I have kept the faith: Henceforth there is a laid up for me a crown of righteousness, which the Lord, the righteous judge shall give me at that day: and not to me only, but unto all them also that love his appearing
- 2 Timothy 4: 7-8a


With heavy hearts but total submission to the will of God, we announce the transition to eternal glory of Husband, our Father, brother, cousin,friend and colleague ; Moses Chimereze Okpo, FCA which occurred on 29th August, 2020 in abuja Nigeria .

Dad, you have fought a good fight, have finished your course, have kept the faith . Henceforth, there is laid up for you a crown of righteousness which the Lord the righteous judge shall give you. It is for this reason that we his family and friends invite you to join us as we bid him this glorious home call . 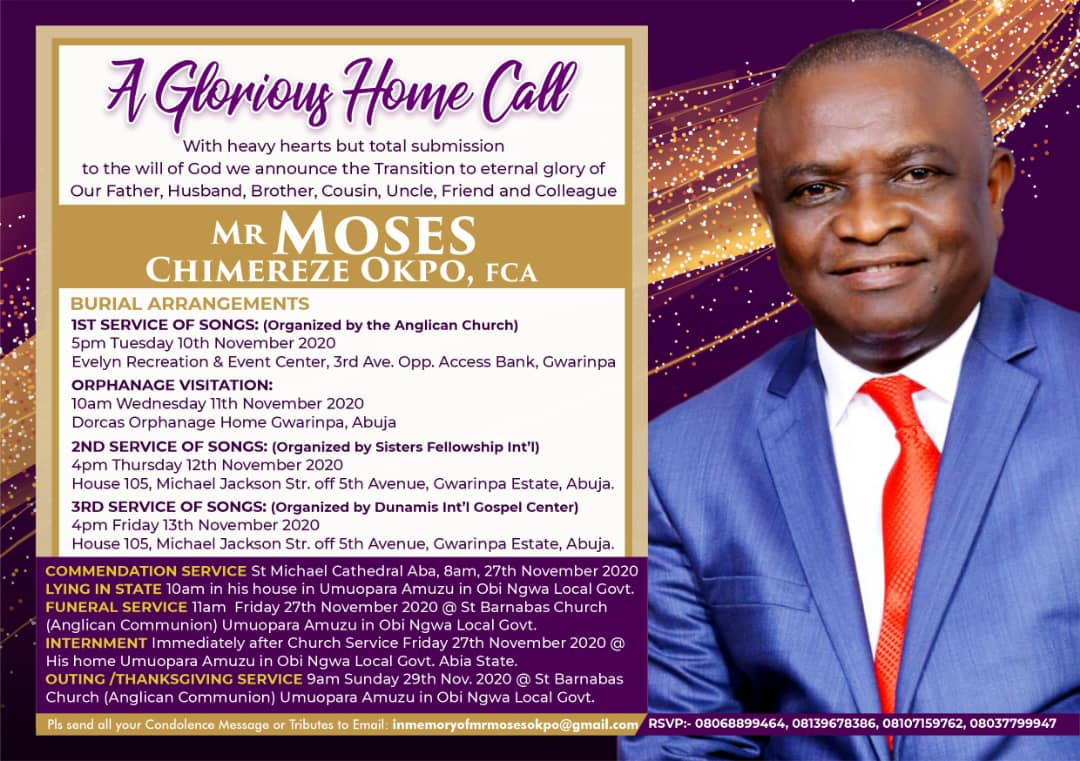 Send your Condolences to inmemoryofmrmosesokpo@gmail.com or Upload your condolences

Tribute to my friend Moses Okpo - A True Servant of the Lord Jesus Christ We met Mr Moses Okpo for the first time at the Anglican Church of Resurrection in 2013. From then on we struck a relationship in which we came to realize his dedication to the work of Christ as the only other work of interest to him. Moses Okpo gave his life, time and money to Christ. He was a sacrificial giver to the wo Read More rk of Christ - a pillar in the service of the Lord. We where amazed at the singular contribution he made towards building a Church in his community. This to us is an outstanding legacy. A noble feat indeed. We had looked forward to see him again especially for all his support to us when I was in hospital last year. It was therefore a totally unexpected shock to us to learn of his passing away. We still have not come to terms with this reality. To Ifeoma and the children we pray that the good Lord will give them the Grace to bear the loss. For we are convinced that he rests in the bosom of the Lord. Rest In Peace my dear Brother in Christ Jesus. Chuma and Ugonnaya EZEDINMA African Development Bank Group Centurion, South Africa Read Less

To my brother, my friend, and my boss Tribute by Sylva Okolieaboh; M.Sc. (London), FCA Director, Treasury Single Account, Office of the Accountant-General of the Federation In late 2003, a cocktail of unrelated events saw me at the Treasury House Headquarters on posting. I was a wet in ear the civil servant, having been recruited three years earlier as part of the Millennium Accountants Read More programme of 2000. Prior to this moment, the headquarters was generally an unfamiliar territory to me. It was a place where I dropped by, at distant intervals to check on friends and colleagues; usually at the car park before I took my leave. On this eventful day, I was at the Treasury House for something less social and more sobering. A verbal directive has just been issued posting me from the National Commission for Refugees to the then Consolidated Accounts Division of the Treasury Service Department at the Headquarters. For a young officer unfamiliar with the ways of the Service and the workings of the Headquarters; for someone like me coming from corporate Lagos, the atmosphere at Treasury Headquarters and CAD at the time was a bit unsettling. During my many visits to the Headquarters preceding my eventual posting, I had passed through the first floor of Block B where CAD was located. The apparent disorderliness and sense of abandonment around that floor and its occupants created anxiety for me. I was informed by those familiar with the terrain that CAD was a dumping ground for the unfavoured and the unconnected. Heaven alone knew why I was singled out to suffer the indignity of CAD. “I was not going to take it”; I assured myself. Whatever it takes to reverse this posting, I was ready for it. It was in this state of utter despair and disillusionment, in one of my shuttles to the Treasury House, that I ran into an impeccably dressed young man of average height on the first floor corridor, just by the staircase leading out of CAD. I recollect the well-tailored and perfectly fitting black suit, white shirt and tie; quite uncharacteristic of the colourful sartorial preferences of civil servants of that era. He approached me with an unusual sense of familiarity and what I interpreted as genuine empathy. He told me that he learnt I was posted to CAD and wondered why I was unfortunate enough to be posted there. He was close to then Director, Treasury Services Department and was going to intervene on my behalf; he assured me. The good Samaritan who met me by the corridor and offered me hope in my state of hopelessness was Mr. Moses C. Okpo. He did intervene as promised and updated me as things progressed. On this fateful morning, I met Mr. Okpo at the Treasury House for scheduled update on the status of my re-posting. The person I met this time was in stark contrast to the boisterous, ever-happy and smiling young man I have known for the past few days. He looked at me with brotherly pity, concern, and visible resignation. “The Director was not disposed to reposting me”; he relayed to me with a palpable sense of regret and disappointment. It was obvious to me that we had hit a brick wall. It was time to give up and face it, whatever it was. I have always known when to let go; and that was the moment. The cost of any further attempt to change the posting after that point would be disproportionate to the benefit of achieving it. I thanked him; and took up what marked the first major challenge of my career. Settling down in an unfamiliar Treasury House of 2003 was not a particularly easy and pleasant one for someone coming from the more predictable, orderly and neat corporate Lagos. The culture of the Civil Service was a source of perplexity to me (it still is; to a lesser degree) and I needed the assuring presence of those conversant with it to settle down. Mr. Okpo was top among those that filled that gap. We would assemble at his office in the next block and over animated banter and sumptuous home-made lunch by his wife, the anxiety and uncertainty of my posting to CAD ebbed. His office was both a meeting point and melting pot. There, you would meet staff of different Departments and grade levels. There also, you were assured of meeting people of different places and social persuasions. His office was the ultimate networking hub. Mr. Okpo led us to the Public Accounts Committees (PAC) of both the Senate and House of Representatives. I have not stopped marvelling at how easily he navigated his way through the maze of intrigues and technicalities that characterized that important theatre of public accountability. The charm, the depth, the smile, the compassion, the eloquence. Not once during the time he led us to PAC did we encounter any moment of embarrassment and needless controversy. He united one Office with another and through him, both the Committee and the agencies appearing before them found a unifying ground. He was the confluence at which the disparate and contending interests of the Read Less

FAREWELL TO A BELOVED BROTHER Moo, as I fondly called you, words fail me in expressing how deeply pained my family and I feel about your untimely demise. My heart still aches in sadness and secret tear still flows. Moo and I had a very cordial relationship and this dated far back to our secondary school days in Aba, Abia State. I recall attending the inter-house sports organized by your schoo Read More l, to cheer you up while participating in the sporting activities. Even when you relocated to the Northern State (Bauchi State) in pursuit of a higher education, you still made time to keep in touch with Daa Ekee. I still have memories of how some of our relatives and I organized a sent forth party for you, after completing an official course in Lagos State. In various ways, you have been of incredible support to my family and I, in very challenging times. You have indeed touched so many lives and you will be dearly missed. Your passing from this world was rather too soon and difficult to comprehend. However, your endearing personality would serve as a legacy for your family. As Christians, we take solace knowing that your creator has called you to rest from all your earthly struggles and hope that we would be reunited on that glorious resurrection morning. Until then, keep resting in God’s bosom. Mrs. M. N. Okwuonu (Nee Daa Ekee) and family. Read Less

Play me if I don't play automatically